Our thoughts are currently with all those who are confronted with the appearance of the corona virus in their family or their environment. We are constantly monitoring the situation. However, as this changes daily and no forecasts are possible right now, our greatest concern is the well-being and health of our employees, customers and visitors.
» Read more

Electromobility in sewer rehabilitation: eCUTTER from Pipetronics is now a complete system featuring the PI.TRON filler and injection sealing system based on formwork

At the 6th German Repair Day in Mainz, Pipetronics introduced the eCUTTER combined with the proven PI.TRON filler and injection sealing system for the first time.

Pipetronics has expanded the functional scope of the eCUTTER to include the proven PI.TRON filler and injection sealing system. The eCUTTER can now also be combined as a complete system. All work here can be done using electrical energy. The system were presented to public for the first time  at the 6th German Repair Day at the Rheingoldhalle in Mainz on April 5.

In addition, Pipetronics presented its new epoxy resin system for use with the PI.TRON - injection system based on formwork. PitroPress 10 in the 500ml tube bag and the PitroPress 12 in the reliable tin. A corresponding mixing and dosing system for the tube bag is available since April  2017.

The combination system of the eCUTTER and PI.TRON filler and injection sealing system is now available. The PI.TRON system enables high-precision and flexible work in partial repair of damaged sleeves and cracks, as well as rehabilitation of connecting pieces in drainage pipes with diameters up to DN 800 as well as all known oval profiles up to 600/900.

As a system provider for intelligent sewer robot systems, Pipetronics also provides complete vehicle upgrades to satisfy customer wishes, all from a single source. Whether in the standard version of a Mercedes Sprinter, installation of a box truck or as a mobile system - the system is always configured for optimum worksite application. Users can also always rely on the Pipetronics team when it comes to maintenance or service work.

As an electric milling robot, the eCUTTER from Pipetronics has already proven its performance capacity. The sewer robot - developed in 2012 - has been utilised at many worksites for up to ten hours doing the toughest milling work at full power with only one battery charge. The benchmark when developing the eCUTTER were the proven high-performance hydraulic robot systems, because when it comes to milling work in sewers the combination of high torque and stable rotational speed is crucial. This goal was achieved. The eCUTTER features the high performance of a hydraulic robot from Pipetronics combined with the advantages of an exceptionally quiet and flexible electric motor. The exceptionally quiet and battery-operated emission-free motor of the electric eCUTTER is particularly advantageous when rehabilitation is being performed in residential areas. The milling motor of the eCUTTER can be infinitely set to the required rotational speed. The variable adjustment of the rotational speed has proven itself especially when the inflow is opened.

Another advantage of the eCUTTER system is that the sewer robot is operated with a voltage of 48 volts (low voltage). An electric current greater than 50 volts can lead to accidents caused by dangerous electric shock to the body. Unlike 230 or 380 volt systems, no cable monitoring via special protection systems is required. Moisture also does not pose a problem in this regard for the 48 volts - unlike the 230 or 380 volt systems, where the required protective switches are often triggered by moisture, generating system failures.

The high level of system safety is documented with the CE-label, which confirms that the fundamental safety requirements defined in the EU-Directives are complied with. The system is also a winner when it comes to work safety.

The eCUTTER is operated with two joysticks, which can also be positioned with video monitors in the two armrests in the comfortable "cockpit". The connected ergonomically beneficial sitting position enables sustained and precise work without fatigue. The sewer robot is supplied with power, rinsing water and pressurised air from just one cable. The plug that connects the robot with the cable can be bent at a 90 degree angle, which makes entry into the often narrow sewer shafts significantly easier. With a total of eight available gear modules, the eCUTTER can quickly be equipped to be used in sewers with large diameters of up to DN 800. Oval profile chassis of 200/300 up to 600/900 are available. 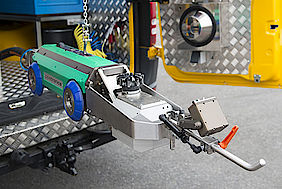 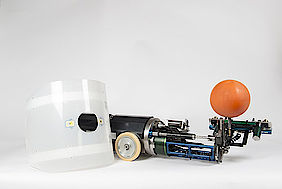