For the first time, the successful renovation company based in Vulkaneifel will be relying on electrically powered multifunctional systems for milling, filling and grouting

On January 1, 2016, Pipetronics entered the sewer robot market as a new company. Emerging as the product of a merger, the system provider had set itself the goal of using intelligent sewer robots to harness the possibilities presented by digitisation and automation for sewer rehabilitation robotics.

The company and its almost 100 employees, with its four branches and new headquarters in Stutensee near Karlsruhe, as well as service centres in Germany and Switzerland, recently celebrated a very special event: in January, sewer robot systems with the serial numbers 99 and 100 were supplied to KATEC-Kanaltechnik Müller & Wahl GmbH. KATEC, with its headquarters in Jünkerath in the Eifel and a branch in Breithenthal in the Hunsrück, is one of the leading companies in the sector within Germany. Initially, the rehabilitation specialist invested in 16 sewer robots in the two electrical multifunctional systems from Pipetronics. These are now the 7th and 8th robot systems from this supplier. At the final assembly plant in Röthenbach an der Pegnitz, Managing Director Christian Noll and the Pipetronics team handed over the first two electrically powered eMULTI systems to KATEC Managing Directors Gerd Müller and Armin Heydt and Fleet Manager Gerhard Bach.

“We are very proud that in our relatively short company history, we have already been able to deliver the 100th robot system and we would like to thank KATEC for the great trust,” said Christian Noll at the handover, “we received our very first robot order from KATEC in January 2016.” The two new eMULTI systems from KATEC each feature the electric milling robot eCUTTER and the PI.TRON filling and grouting system for use in pipe diameters DN 150 - DN 800 (including ovoid profiles).

The exceptionally quiet and electrically powered milling robot “eCUTTER” was the first innovation in the short company history of Pipetronics. The performance benchmarks during development were the proven, high-performance hydraulic systems. Electrically powered multifunctional systems, or “eMULTI” for short, have been supplied since 2017, the eCUTTER in one system with the proven PI.TRON filling and grouting process.

In addition to the multifunctionality of the eMULTI systems, a significant advantage is also provided by the electric drive of all systems, which is based on a safe 48 volt on-board network. The systems are usually powered by a rechargeable battery, which enables an entire day of work without any additional external power supply. “The systems are significantly quieter and more economical than conventional milling robot systems powered by air or oil. This is clearly demonstrated by the energy balance,” explains Pipetronics Managing Director Christian Noll. The quiet, electrically powered milling work could also be undertaken in the evening or at night, as the disturbance to residents is reduced to a minimum compared to loud background noise.

In the meantime, more than 90% of the robot systems at Pipetronics are ordered and delivered as electrical eCUTTER or eMULTI systems. It’s an impressive concept.

Electric, multifunction eMULTI systems from Pipetronics are attracting increasing interest from sewer rehabilitation companies. They allow to carry out several necessary tasks on the construction site with one system and one crew. This multifunctionality that Pipetronics offers is unique worldwide. The system design is based on a robot system that is equipped with an eCUTTER and the PI.TRON filling and grouting process. The other systems can be easily attached to the filling robots using a bayonet lock. All of the systems are now operated solely via a control station. Each customer can assemble his system individually so that it can be easily retrofitted with additional technologies later if necessary. The eMULTI therefore offers a wide variety of possible uses.

eMULTI: Up to 7 technologies in one system

In addition to milling and the tried-and-tested PI.TRON filling and grouting system, a modern hat profile technology has now been added as a further application with "HATSet". The innovative WaterStop for pre-sealing pipes prior to the installation of the pipe liner is currently in the construction site test phase. If water infiltration can be reduced to a minimum when installing pipeliners, quality problems due to water contact and thus emulsion formation can be largely avoided. The current eCUTTER can optionally be equipped with a 4th axis, which enables a stepless swivelling of the milling head up to frontal milling. A mounting device for high-pressure waterjet milling machines “HYDROJet-Kit” can also be installed quickly and easily on the basic robot using a bayonet lock.

With the newly developed ovoid profile chassis, the eMULTI technologies can also be used in these tubular profiles. They are uniquely equipped with a remote-controlled, electrically freely-adjustable chassis for use with both milling and other techniques in ovoid profiles.

The eMULTI robot technology is increasingly being equipped with the latest sensors to monitor device functions. The surgeon is shown important information about the device status as well as warnings about e.g. moisture penetrating into sensitive components. The latest generation systems are fully equipped with modern CAN bus technology. This enables the systems to be expanded with various sensors as well as new functions and assistance systems. If necessary, Pipetronics technicians can access the systems via remote maintenance and thus support the operators on site.

Pipetronics undertakes the entire vehicle fit-out itself at its Rheda-Wiedenbrück plant. The systems are configured entirely for use on the construction site, so individual customer requests can be implemented quickly. In many cases, at the customer's request, the systems are also supplied with a flushing unit for cleaning prior to the renovation or with the latest camera technology for TV inspection. The systems are manufactured in the Sprinter with a trailer, as an installation in a truck box or as a mobile system. In addition to service and maintenance, Pipetronics also develops and builds its own power generators under the brand name “QUICKLAND” at the Rheda-Wiedenbrück plant. These have been specially developed for use in vehicles: quieter and lighter than conventional units. For this purpose, Pipetronics specialists advise customers in advance on how to assemble the vehicles so that everything can be properly configured for use on the construction site.

The story of a successful sewer rehabilitation company in Germany

“I can help you - but it won’t be cheap...”. This is how the conversation between two gentlemen began in the spring of 1997. Gerd Müller, civil engineering contractor, with damage to a freshly laid sewer under a recently asphalted village road, and Thomas Wahl, at the time site manager at one of the first companies for trenchless sewer repairs. “They arrived at the construction site with a device that went into the sewer and actually made an intact one out of a transversely cracked pipe!”

Wahl: “We mill out the crack and fill the whole thing with a high-quality epoxy resin, that lasts forever.” Müller, until then more of a friend of robust trenching, ordered the service and was amazed at how this robot, remotely controlled by an expert hand, was actually able to fix a transversely cracked pipe, professionally and underground, and was then removed from the sewer system without any problems.
Müller was fascinated by the technology and Wahl accepted Müller's idea to offer this trenchless sewer rehabilitation as a joint company in the future: Kanaltechnik Müller und Wahl - KATEC! It took a lot of courage and, despite their thin capital outlay, the first robot system was acquired from KA-TE System AG in Switzerland and Mr. Wahl was also able to persuade system managers Bürgel and Bruchman to join the new company. That's how it all began. One system became two, three, four...

But, dear reader, please do not interpret my introduction to this article as a quick and easy guide on how to set up your own business. On the contrary, starting a company and building it up is anything but easy. At that time, the field of “trenchless sewer rehabilitation” was still largely unknown, and the rehabilitation market was relatively small and dominated by a few companies.

KATEC, which at the time was often working as a subcontractor, established itself as a specialist in repairs using sewer robots. The first employees were experienced operators and they trained the next generation so that the company could grow organically and steadily. Using exclusively Swiss robotics, the KATEC operators performed real feats of skill with the machines, particularly for the most difficult applications and outside of the classic in-line repairs. The milling of cracks, sockets and shards in all sizes and profiles using powerful hydraulic milling systems, as well as filling in damaged areas, is an art form that was mastered by the experienced technicians of KATEC and has become routine today.
Since 1997, KATEC has repaired thousands of pipes damaged by the inadequate laying, bedding and covering of the pipe systems by their builders. Also house connections which are, let’s say, often imaginatively installed, e.g. sometimes straight, sometimes inclined or connected at right angles to the sewer, are re-milled, encased and transformed back into watertight connection fittings. In the context of sewer repairs, the results are as good as with sewers renovated with pipe liners, where, among other things, branch fittings or double connections have to be connected. It can also be used in ovoid profile pipes, lined up from 200/300 to 600/900. Inlets far along ovoid profile pipes can be rehabilitated.

In addition to the focus on milling and filling with hydraulic robotics, the company owners developed one of the first manhole coating systems in 2000 and were involved early on in systems for partial pipe lining using lining and assembly processes. The hat profile process is the only procedure that KATEC declines, however not without reason.

Instead, Müller and Wahl were certain that the renovation using GFK liners had a promising future. In 2010 a new supplier arrived on the market: Christian Noll with the newly founded RELINEEUROPE. KATEC was one of the first to make use of the process with an annual productivity of 40 km of pipe liners. The company invested in the latest UV system technology and has steadily expanded this area over the past few years. An innovative step that from then on made it possible to offer all essential trades in the field of sewer rehabilitation from a single source.

During this time, in addition to the KA-TE repair method used so intensively by KATEC, potentially revolutionary new methods were tried, e.g. fast-curing injection systems. A flash in the pan as we know today! The tried-and-tested filling and grouting process is still considered the leading standard process for the trenchless repair of such pipe damage.

“However, one German system manufacturer didn’t fail to impress with its development, innovation and commitment.” The Pipetronics company had set itself the goal of winning over KATEC as a customer. The technology was a hit and since 2016, in addition to the ten existing KA-TE systems, six hydraulic PI.TRON systems from Pipetronics have been put into service at KATEC. With a total of 25 columns, KATEC has been pushing innovation and customer-oriented service since 1997 and has become a leading company in technology and know-how. So it’s only logical that the next level of innovation in the Pipetronics product portfolio is designed in collaboration with KATEC, together with investments in the latest generation of “intelligent robotics”. The company will purchase a total of seven new robot systems, which are no longer powered hydraulically, but electrically.

A lot of user expertise and experience has been distilled within the design of the system. This transition didn’t come about because electrical systems are “hip”, but out of the conviction that these new “eMULTI robots” will be even more efficient and environmentally-friendly while presenting great potential for further innovations.

Two new eMULTI systems have now been delivered and are battery-powered, quiet and with powerful electric milling heads. These newly developed milling robots will be able to carry on performing the most complex sewer repairs, which KATEC and its sewer specialists have become used to over the last two decades. 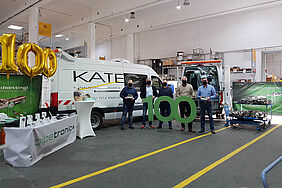 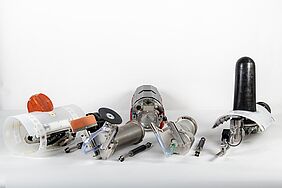 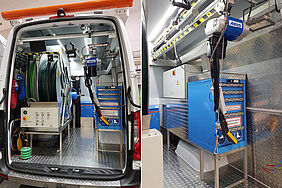 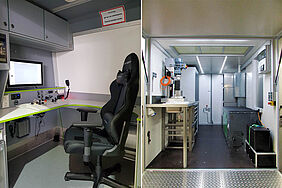 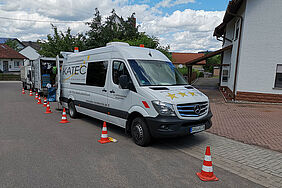 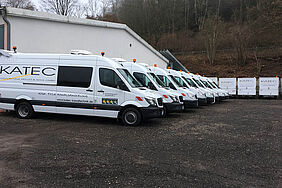